„The idea was a process“

Shaury Iddi Hassan lives in Kitogani, a village in Zanzibar, Tanzania. In 2019 he initiated a community project which aims to sustain the mangroves of Kitogani for future generations and to improve the well-being of the community. We spoke with him about mangroves and community work.

Shaury, you are offering guided tours into the mangroves of Kitogani on Zanzibar. How was the idea born?

The idea was a process. We, my colleague Ramazan and I, were thinking about the problem that people in the village cut down mangroves for e.g. fire wood and to produce charcoal, because they do not have an income but families to sustain. It is very hard for the people to survive without natural resources. So, we were facing the question: how can we provide alternative incomes to them in order to stop mangrove destruction? The mangroves in Kitogani are not protected, they are exploited without any rules and management. We wanted to create something to raise awareness about mangroves and to provide income opportunities for the community. Then, the idea came up to offer guided tours in the mangroves and to put earnings back into the community. That’s how “Zanzibar Mangrove Tour” was born.

How does a guided tour into the mangrove look like?

There are two options: going by a traditional canoe at high tide or by feet during low tide. Along the way we are explaining the tourists e.g. which mangrove species they see on the basis of leaves, fruits and roots; which animals in the mangroves live and why mangroves are important e.g. to protect the coastal villages against the rising sea level and tsunamis.

Yes, which mangrove species grow on our beautiful island and how important mangroves are for marine life.

“Zanzibar Mangrove Tour” is not just a tourist attraction it’s a community project. Please tell us more about your community work.

In order to pave the way towards mangrove conservation it is very important to provide alternative income generating activities to local people. As long as people do not have enough money for electricity or gas they will continue to use mangrove wood. Our goal is beside conserving the mangroves to give employment to many people as possible within “Zanzibar Mangrove Tour” as well as to offer activities to strengthens the community. So, that at the end there will be no reason anymore to destroy the mangroves. Quite the contrary: the mangroves need to be conserved since they help us to have a better life.

What kind of activities and support are offered to the community?

We use the earnings from the mangrove tours to offer different activities which improve the well-being of our community. For instance, we do environmental education with teenagers to pass on our knowledge, to ensure mangrove protection in the future. We also do mangrove clean ups to teach the community that nature can only be enjoyed if its clean. Many people do not know how to swim, that’s very dangerous when you live on an island. That’s why we offer swimming classes in the shallow water of the mangroves. Furthermore, we encourage women to use their creative skills to develop income like making baskets with palm leaves. We also do financial support to e.g. poor families, to enable their children to go to school and elderly, if they need to have a medical treatment in the hospital.

You are doing environmental education with teenagers to conserve the mangroves for future generations. How do you work with them?

In our village we have a Madrasa since Zanzibar is Muslim. We go there to involve teenagers in our mangrove conservation work. We inform the teacher prior what we are planning to do e.g. a mangrove planting or a clean-up. During the work we explain them why mangroves are important. We also provide food and give them a little bit of money for their work. The outcome is: the teenagers understand that they get money without destroying the mangroves. By doing so, we also want to introduce them to nature conservation.

For a long time, tourism was not possible because of the pandemic. How is the situation on Zanzibar at the moment?

The pandemic was quite difficult for “Zanzibar Mangrove Tour” since tourism was down, but we live in a village and help each other. During the lockdown the people were exchanging groceries to ensure that everyone gets food. But slowly the tourists are coming back to Zanzibar and we hope it will be good again next year. Currently we are planning to build in close proximity to the mangroves a reception and a small restaurant, where the community can offer food and other individual products to the tourists.

For those, who are interested to take a tour into the beautiful mangroves of Kitogani: Where can they find you?

We do not have an office or a sign yet. You can reach us via WhatsApp, per Mail, Instagram or Facebook. We would also be very happy to receive donations for our project. I am pleased to answer any further questions about our project. 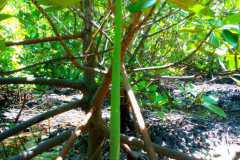 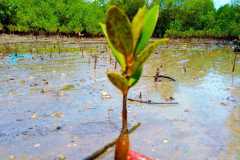 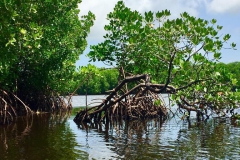 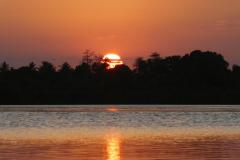 Thanks a lot Shaury for providing insights into your engagement in mangrove conservation and community work.

„Land reclamation is a big topic“

Shiva Thorat lives in Navi Mumbai, Maharashtra, the twin city of Mumbai. He studied Political Science (BA) and Media & Cultural Science (MA). He is filmmaker, researcher and published the trailer “Mangroves: Mumbai’s Last Guards”. We talked with him about the city and its mangroves.

Shiva, how did the mangroves get your attention?

There was not this one moment, it was more an assemble of things happened. My area of interest is geography and history connected to political science. A big topic throughout India is “development” and “land reclamation[1]”, the tremendous growth of Mumbai has led to a rampant destruction of mangroves. Our coastline is densely grown with mangroves but they are facing ever increasing pressure due to land reclamation for urban development and industrialization. The beginning of this process reaches far back to the East India Company[2], who started reclaiming land from the sea and filling low hills, tidal flats, mangrove forests and salt pans to join the former seven islands to one island city – today’s Mumbai. These days Mumbai is so jam-packed, that even more land is reclaimed from the sea. Furthermore, I experienced several times unawareness about mangroves in the society. So, I decided to start awareness raising work by making a film.

Mumbai lost around 40 % of its mangroves in the last decades. How is the state of the mangroves today?

The state of the mangroves in Mumbai is still bad. Down the shoreline of Mumbai, you can see their destruction. A lot of urbanization projects in coastal areas are in progress and at the planning stage, mostly private gear owned. A current urban development project is the Navi Mumbai International Airport, which is literally built on mangroves. So far, around 200 acres of mangroves, located in the area of Vashi and Ulwe, have been destroyed for its construction and it is assumed that the project will cause to vanish in total 400 acres (162 ha) of mangroves.

Mumbai has many indigenous fishing communities which depend on the sea and the mangroves. Did you speak to them about the destruction?

Yes, they are worried about their future. The destruction of mangroves affects especially the coastal communities and migrated people (Mumbai has a long migration history) since their livelihood is based on fishing. The Kolis[3] inhabited this land before the East India Company built up Mumbai, but nevertheless, their voices are not being heard. CIDCO[4] grabbed the land from the coastal communities for building the new airport. The fishing communities are classified as marginalized by the Indian government. Furthermore, the fishing communities have no union or political leader who represent them for speaking up as they are divided into several ethic and political groups. The capitalist development had deprived them from their livelihoods and living spaces. The sea and the mangroves are their lives, so alternative livelihood options are rare, most of them will just keep surviving. Many families are still fighting for fair compensation, their accommodation and livelihood options remain unclear after losing their land and the mangroves.

The ‘Coastal Regulation Zone’ (CRZ)[5] notification was a key landmark in the Indian environmental policy and legislation with the intention to protect coastal ecosystems and coastal livelihoods of fishing communities. How could the airport be built under this regulation?

During the post-liberalization era[6]  there has been no ministry of science in the ministry of environment. I think, it is very important to include science in policy in order to understand relationships and effects in nature. But also the fact that only people from the upper caste work in the ministry and the lower caste is not represent results in the ongoing violation of the ‘Coastal Regulation Zone’ in fishing areas. The fishing communities are the inhabitants of Mumbai and their knowledge about the sea and the mangroves is of incredible value. Despite all that, they are economically and socially marginalized by the Indian government and voiceless. However, the capitalist people have the capacity to influence the state, replacing nature with concrete wherever they want – regardless of any regulation.

Will the trailer be followed by a film? And if so, what can we look forward to?

Yes, the film will be continued, focusing on the historical reclamation of mangroves in Mumbai. The film aims to tell the story of indigenous people who saw their green, rich biodiverse wetlands – they called home – be replaced with a shiny, concrete exhaust-fuming city with a GDP of US$61 billion. The film will begin with an introduction to a local fisherman on a boat reminiscing the Mumbai of his childhood, telling us, how life was back then…

Thanks a lot Shiva for this very informative and interesting interview. We are looking forward to the film!

[1] A process of creating new land from the sea, or wetlands, or other water bodies.

[2] A private company managed by Robert Clive during the British colonial rule in India. From the early 18th century to the mid-19th century they conquered, subjugated and plundered vast tracts of south Asia.

[3] The aboriginal inhabitants of Bombay and certain nearby areas. Since the fifteenth century AD, Kolis have inhabited the Bombay islands. There traditional profession is fishing. During the monsoon period they stop going out to the sea as their small boats can’t cope with the turbulent sea but also its breeding season for fish. They are slowly transitioned to social extinction.

[4] The “City and Industrial Development Corporation of Maharashtra Limited” is an Indian city planning agency and richest government authority in India.

[6] Economic growth after 1991 accompanied by a free-market economy, a substantial reduction in state control of the economy and increased financial liberalization.

Article and Trailer by Shiva Thorat: 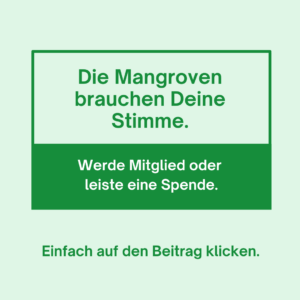